I bought this lens used (very used!) in San Antonio. It is a fantastic lens for astrophotography. This lens weighs about 6 pounds. It mounts directory to a tripod socket. The Losmandy DCM2 camera mount is a very heavy-duty piece of equipment, but is hard to tighten to the point where a large, heavy lens does not shift. Thus, a brace was necessary. 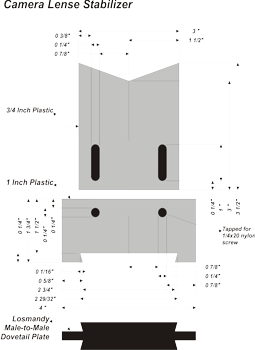 Sometimes I actually make a plan! 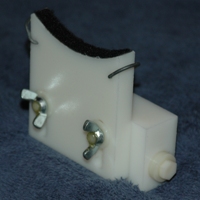 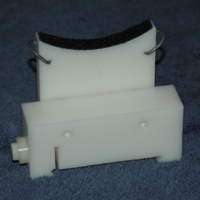 The brace is made from "cutting board plastic", available in several thicknesses and colors at most plastic supply companies. I used a tablesaw to cut out the pieces and a router with a 1/4 inch spiral upcut bit to make the adjustment slots. I drilled and tapped the adjustment holes to accept a 1/4-20 nylon bolt.


Cutting the dovetail socket into the bottom of the brace was by far the hardest part. I did it with the tablesaw, the blade raised about 3/16 inch above the table surface. Moving the block of plastic back and forth slowly removed the material, leaving a faily flat surface to ride on top of the dovetail. Next, I tilted the tablesaw blade to match the angle of the Losmandy dovetail plate and cut the two dovetail corners. A 1 inch deep slot with a tapped hole and bolt allows the base to tightened to the dovetail, securing the brace against movement. 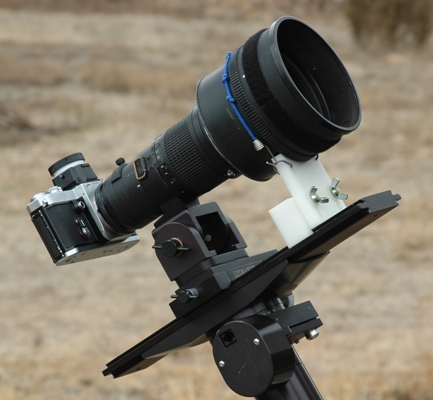 I made one change from my original plan: instead of an angle cut to cradle the lens, I cut a curve with the router and circle jig to match the lens's barrel. A strip of Velcro (the fuzzy side) provides a soft "landing area" for the lens. A small bungee cord wraps around the len and is secured to each side of the brace to keep the lens secure and immobile as the the mount tracks.


I have been using the brace for years now, and have had no problems at all with it. Slides from 60 minute exposures show no indication of the lens shifting.